“Skinwalkers” is an ongoing series (with 8 chapters so far) created by Brazilian artists Super-Ego (a.k.a. Rex Ego) and The Other (a.k.a. Entrecoxas). Super-Ego draws the art while The Other colors and adds textures. It’s unclear who writes the stories, presumably they both share that task. (NOTE: The title has no connection to the Navajo harmful witch yee naaldlooshii, called skin-walker in English translations.)

The Skinwalkers concept began in 2013 with an illustrated page that Super-Ego posted on his DeviantArt page on 20 August of that year. He created nine more pages, with the last posted in early December 2013. The series was well-received and eventually led to Super-Ego partnering with The Other to create a Skinwalkers series for sale. The first chapter of that series was released on September 21, 2018, and the latest was published on April 29, 2019.

Skinwalkers is set in Barra da Tijuca, a neighborhood in the western portion of Rio de Janeiro. It’s important to remember the setting in order to understand the story. For example, references were made to civil and military police. When I first read military police I assumed that there was a connection to the Army, because military police in the United States only have jurisdiction over soldiers. However, if I understand it correctly, Brazil’s Military Police maintain public order while Brazil’s Civil Police conduct investigations and prosecutions. In that sense, Brazil’s Military Police are similar to France’s Gendarmerie. (Please correct me if I’m wrong.)

I enjoyed the setting. Not every tale needs to be given a specific location, yet too often readers are never told where an illustrated size-fetish story takes place. Perhaps that’s an intentional choice made so fans could imagine the events taking place in their own local setting. However, that choice can make stories feel flat and boring because of their use of generic environments.

This 30-page color illustrated story involves police officers and reporters sent to investigate a series of disappearances connected to the residence of a so-called “witch.” Upon their arrival, the group is confronted by a colorful devil that shrinks them down to microscopic size and places them on the witch’s skin. The remainder of the comic shows how they struggle to survive as they seemingly continue to shrink.

It was clear that the creators were not experienced writing in English. There were several grammatical and spelling errors, for example “breacked” for broke, “cand” for hand, “her’s” for her, “midia” for media, etc. I can sympathize with the difficulty working in a language that is not your mother tongue. The creators could benefit by having someone fluent in English review and correct their work. It wouldn’t take much effort or time to correct the mistakes. 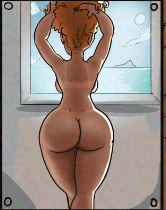 Also, the witch refers to herself on social media as “Corpulent Melissa” for some inexplicable reason. Dictionary.com defines corpulent as “large or bulky of body; portly; stout; fat.” Merriam-Webster defines corpulent as “having a large bulky body, obese.” Based on her image to the right, I would not use a synonym for fat to describe a woman with that narrow of a waist. I think that perhaps “curvy” or “voluptuous” would have been more accurate and appealing descriptors.

Bottom line, this is not erotica. Corpulent Melissa was drawn with a sexy curvy frame, but did not derive or seek sexual pleasure. (NOTE: Perhaps she did, but our viewpoint was that of the minuscule people on top of her body so that was never seen.) The tiny people on her skin certainly did not derive any pleasure from their experiences.

Instead, I would classify this as a unique tale of horror involving people shrunk incredibly small and placed onto the skin of a beautiful busty woman.

For those interested, you can visit the following pages to acquire this comic:

6 thoughts on “Super-Ego & The Other’s “Skinwalkers: Chapter 1 Welcome to Melissa””