It’s interesting to examine the roots or foundation of modern macrophilia. Accordingly, I reviewed 1958’s “Attack of the 50 Ft. Woman” last week. And in that same spirit, today I’ll analyze a story taken from an Entertaining Comics (EC Comics) “Weird Science” issue published in 1950.

(NOTE: “EC” initially stood for Educational Comics. Additionally, to save money, EC would rename their comic book series, but continue the numbering. Post Office regulations at the time called for a large deposit to secure a mailing permit. EC Comics tried to work around this rule by renaming an existing series to avoid the expense of a new permit. Thus, the “first” issue of Weird Science is number 12. Previous names for the series including “Happy Houlihans,” “Saddle Justice,” and “Saddle Romances.”)

Weird Science #12, includes four stories, the first entitled “Lost in the Microcosm.” This was written by Al Feldstein with art by Harvey Kurtzman. Its protagonist is a biochemistry researcher named Karl. Due to a laboratory mishap, his size reduces to microscopic dimensions, then atomic. However, he discovers that within every atom is a minute universe. He eventually enters a system with a star and planets, just like our own solar system. Initially, Karl would be larger than the atom’s internal solar system, but then he would shrink small enough to stand on one of its planets, albeit as an enormous giant, then he would assume human scale, and finally would become too small to be seen. Eventually, Karl shrinks into another atom and through that discovers yet another solar system, beginning the cycle anew.

(NOTE: As one might imagine, a strong suspension of disbelief is required. For example, it’s never explained how Karl can breath in a vacuum, why doesn’t he freeze to death, etc. However, such flexibility is a common requirement in macrophilia. Many stories do not address how giant people could survive outside an atmosphere, how they eat, etc.)

Karl is given a pistol that shrinks down with him to counter the various threats he might encounter. The handgun is used against a house fly, a white blood cell, and hungry protozoa. That comic likely was influenced by Henry Hasse’s “He Who Shrank,” published in the August, 1936, issue of “Amazing Stories.” (Notably, that story does address, very briefly, how a subject could survive in the void of outer space.)

I enjoyed the art. However, it could be described as simplistic. Most panels have nice backgrounds, but a few are just solid black backdrops. Additionally, the depictions of galaxies and stars was underwhelming compared to the cosmic scenes shown in Marvel comics, like their Silver Surfer series. (Granted, those Marvel comics came out many years after this comic.) 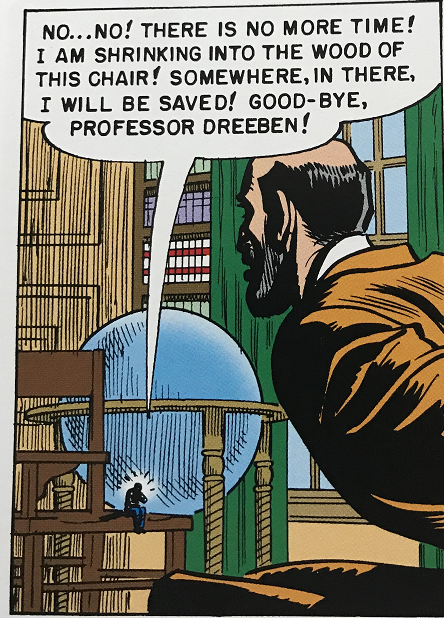 However, I’d love to see an erotic take on this theme featuring a beautiful woman first appearing larger than a planet and then gradually shrinking down to sizes in which interaction would be feasible. The possibilities would increase as she slowly shrank, and that could be depicted in graphic detail. Then she would reach a point where she is smaller than a person and the tables would turn. 😉 However, in time, she would shrink out of this world and would once more be proportionally immense compared to the people of that new universe. Of course, substitute a handsome man depending on preference. Hmm… or a lovely couple could be the subjects of the story.  There’s awesome potential here!  🙂

Folks interested in this comic can find it within the “EC Archives: Weird Science Volume 1,” which is available for purchase in hard and soft copy. Additionally, I found some copies of the original Weird Science comic on eBay, but that’s an expensive alternative, so I recommend the archive instead. 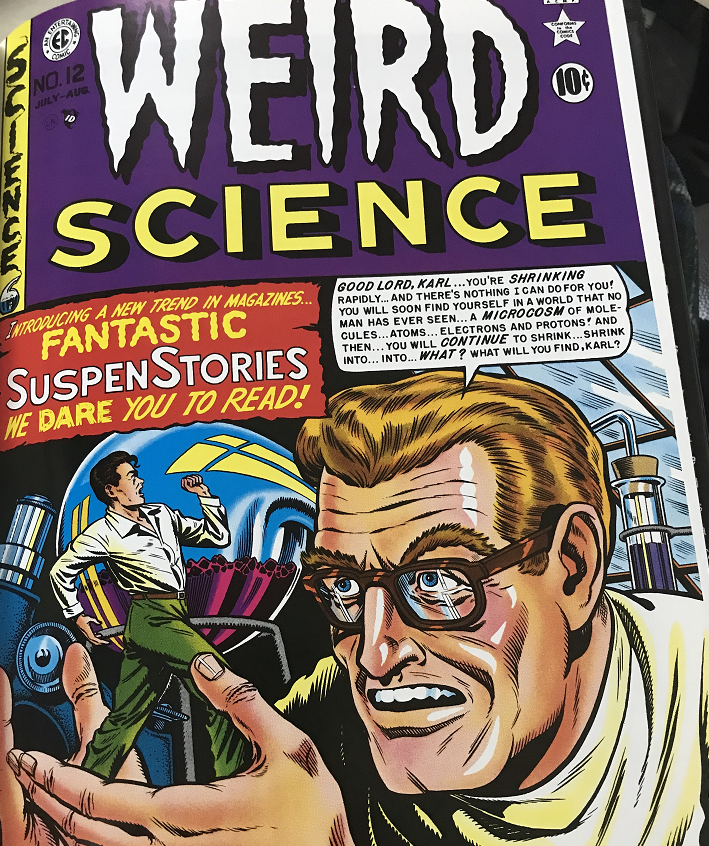