Valkyrie Drive Mermaid (ヴァルキリードライヴ マーメイド) is an anime involving girls infected with the A Virus (Armed Virus), a non-lethal contagion which only affects a limited number of females. The virus causes girls, called Extars, to transform into objects like swords or armor or even a motorcycle when aroused. Other infected, called Liberators, can wield their transformed partners in combat. (NOTE: “Mermaid” is the name of the island where the infected live until a point at which they can rejoin society.)

Yōsuke Kuroda (黒田 洋介) wrote Valkyrie Drive Mermaid, and has worked on other anime such as “Jungle de Ikou!,” “Mobile Suit Gundam 00,” and “My Hero Academia.”

Valkyrie Drive Mermaid’s protagonist, Mamori Tokonome, transforms into a sword and is used by her lover Mirei Shikishima. (NOTE: The kanji, 処女 , used for Mamori’s family name, Tokonome, can also be read as “Shojo,” meaning virgin. Thus, she repeatedly reminds people that her name isn’t virgin.)

The implications of girls turning into objects are rather interesting. Normally, when the term objectification is applied to media it’s used to describe “sexual objectification.” Sexual objectification, as defined on Wikipedia, is “the act of treating a person as a mere object of sexual desire.” So, a sexually objectified woman may be judged solely on the criteria of physical appearance and willingness to have sex.

However, while girls in this series literally become objects, they presumably cannot have sex. Foreplay seems to be the only sexual act possible as once the ladies become sufficiently aroused they transform. Which I think would lead to our characters becoming rather frustrated. However, what makes the Extars special is their ability to become objects of war. Thus, arguably the entire premise of this show is the objectification of sexy girls, except as tools of war vice sex objects. That said, there are extensive displays of sexy females kissing and fondling one another. So, perhaps it is a form of sexual objectification but an even more insidious form, in which the attractive ladies titillate onlookers but are never given the option of achieving orgasm?

Valkyrie Drive Mermaid was originally broadcast from October and December 2015. (NOTE: The franchise also includes a video game for the PlayStation Vita and Microsoft Windows, a social game for Android and iOS devices, and a manga.)

This particular episode, Giant Girl, Little Heart (ジャイアント・ガール、リトル・ハート), was first shown on November 7, 2015. In this, a giant-sized lady named Nimi Minimi (未弐身 にみ) encounters three others, Mamori, Mirei, and Kasumi Shigure (a senior peacekeeping officer) in the forest. Nimi introduces herself as a person infected with the A virus and tells her story. She and her Liberator Noe Ōya (大屋乃絵) met on the softball field. (Lesbians in softball?

Nimi’s abilities as an Extar were not activated, so Charlotte Scharsen (another member of the island’s peacekeeping force) separated Nimi and Noe in order to find a new Liberator to “Drive” Nimi’s powers. According to the Valkyrie Drive Wiki, Drive is “an effect caused when a Liberator and Extar combines their power so that the liberator can wield the extar that has transformed into a weapon.”

Upset at their separation, Nimi ran into the forest. She feel asleep and woke up the next day as a giantess.

After finishing her story, she is invited back to their residence. There, Nimi is fed and returns the favor by going to the beach and catching a large number of fish in her bikini top. (As busty women are wont to do. At least, I think they’re wont to do. Well, I’ve never seen a busty woman use her bikini top to fish, but it’s possible.)

Mimi’s initial growth spurt was off-camera, but viewers are privy to two more growth sequences! That tally includes the one represented in the image below in which she outgrows a makeshift white bikini.

Mimi is convinced to travel back to the castle where her lover Noe is being held and express her true feelings. Being nervous, Mimi grows even taller while approaching the castle. Her appearance startles Charlotte, and one of Mimi’s enormous nipples knock Charlotte back. The buxom pink-haired beauty then prepares to do battle. However, Kasumi intervenes and the crisis is solved when Mimi and Noe finally share their feelings and Noe makes a leap of faith into Mimi’s copious cleavage. 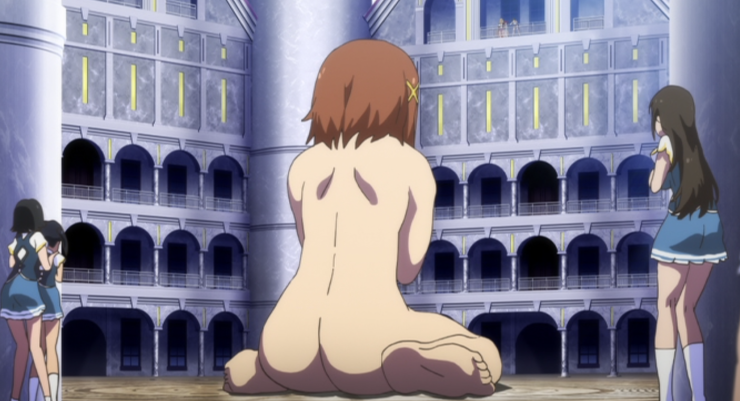 Turns out that Mimi’s ability as an Extar is to grow taller. (Not sure how a Liberator would drive her as Mimi seems perfectly able to use her ability without assistance. That’s in stark contrast to an Extar, like Mamori, that becomes a sword and needs someone to swing her around.)

This was a fun episode with oodles of fan service. It feels like this was tailor made for fans of gentle busty giantesses. Further, there were many lovely ladies in romantic relationships. That includes Charlotte and her several girlfriends that form armor when aroused, ergo she kisses everyone in her harem and they transform. As per the standard for Japanese media, genitalia are not shown (but many exposed breasts are displayed) and the most seen in this show is breast play and kissing.

P. S. Mimi re-appears, normal size, in Episode 6 at a festival where Noe cooks yakisoba. Mimi was very briefly shown again as a giantess during a fight scene in Episode 12, at the end of this series.