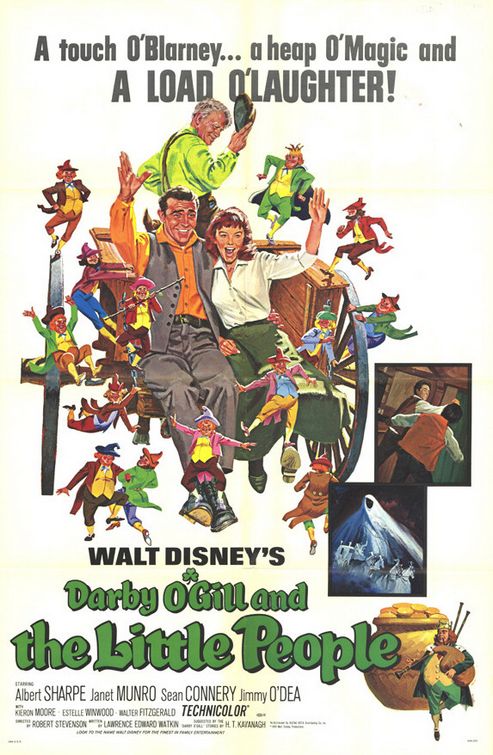 Today is March 17, 2020. This date is recognized in many countries as Saint Patrick’s Day. Saint Patrick’s Day was originally established to mark the introduction of Christianity into Ireland. However, over time the holiday also came to celebrate Irish culture and traditions, particularly in the diaspora. Accordingly, for today’s review I sought out a work focusing both on Irish themes and size.

Of note, this film featured Sean Connery’s most prominent role to date and predated the role for which he become famous, coming before his first performance as James Bond in 1962’s “Dr. No.”

But let’s put aside Sean Connery, this is Darby’s movie as the title indicates. Albert Sharpe provided a great performance as Darby. The story begins with Darby regaling bar patrons with tales of the little people and his interaction with their king. While Darby is busy drinking instead of working, his employer, Lord Fitzpatrick, comes to see Darby at his residence.

Lord Fitzpatrick intends to replace Darby with a young man named Michael McBride. While that may sound harsh, Fitzpatrick plans to provide Darby a half-salary and a free place to stay for the rest of his life. That sounds like a pretty good deal!

Alas, Darby is dismayed and convinces Michael not to tell the true situation to Darby’s daughter Katie. (NOTE: Viewers should then immediately expect that the tired old trope “Liar Revealed” will prominently feature in this work’s conclusion. Although, to be fair, perhaps that trope wasn’t as over-used when this was produced in the late 1950s.)

Meanwhile, King Brian has learned of Darby’s fate, and arranged to abduct him so he may spend the rest of his day in the mountain lair of Knocknasheega. There Darby will drink, play music, and make merry for the remainder of his life, but still Darby wants to flee. 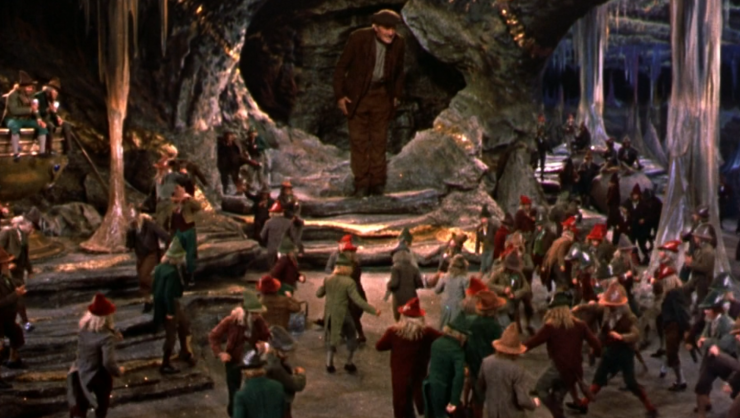 (NOTE: The biggest flaw is that much of the conflict doesn’t land. Ergo, Darby did not want to be replaced, but I have a hard time getting upset about an old man getting a pension and a place to live, rent free, for the rest of his life. He will have to move his belongings, but it was not established that his new place would be any worse than his old one.)

Nonetheless, our protagonist escapes by whipping the little people into a frenzy with a rousing violin performance of “The Fox Chase.”

The leprechauns ride tiny horses out into the woods and Darby makes his way back home. King Brian catches up with Darby, but again Darby has a plan. He occupies the king with a singing game and a jug of poitín, a traditional alcoholic beverage. 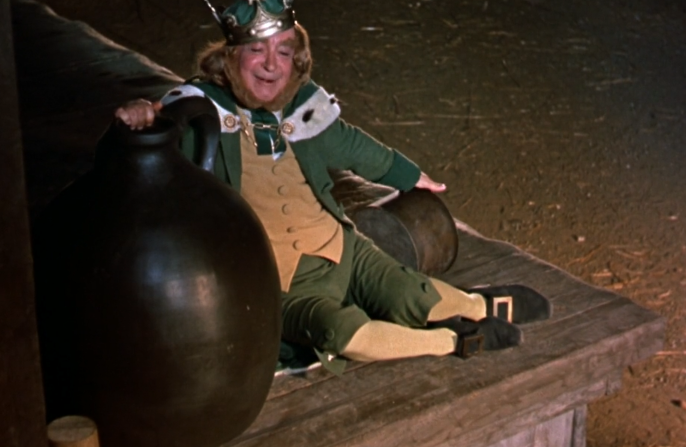 This scheme carries on until the following day. The king’s magic is much less formidable during the daytime, and thus Darby is able to capture King Brian and extract a promise of three wishes! (On a previous occasion, Darby had won wishes from the king, but was tricked into making a fourth which broke the rules and undid the previous wishes.)

Darby takes his sweet time trying to decide what to request. He makes an initial wish that King Brian would not flee and therefore Darby would have time to chose wisely. However, shenanigans ensure and Darby is later tricked into wasting his second wish.

While he endeavors to conceive of the best possible wish, tragedy strikes and his daughter is mortally wounded. This leads into a legitimately effective scare when a banshee appears! (NOTE: A banshee is not a destructive entity. It does not CAUSE someone to die, but merely alerts family members, with the banshee’s wail, that someone they love is about to pass on.)

A phantom coach driven by a headless spirit (a dullahan) arrives to convey Katie to the after life. Darby uses his final wish to save her life; I won’t disclose everything about the finale, except to say that a typical Disney ending can be expected.

At the beginning, I mentioned a desire to focus on Irish themes. Not only does this work feature Celtic mythological figures, but it also included a bit of the Irish language. For example, Darby counts to four, “aon, dó, trí, ceathair,” before playing The Fox Chase, and King Brian rallies his men with “Ar aghaidh linn!” (Ahead with us!)

(For folks interested in a work which examines the Irish language in modern Ireland, I highly recommend “Yu Ming Is Ainm Dom” (My Name Is Yu Ming). That 2003 production tells of a Chinese man who learns Irish to travel to the Emerald Isle, but once there he cannot accomplish routine tasks because very few people actually understand the Irish language. Yu Ming Is Ainm Dom can be viewed for free on YouTube.)

To be clear, the use of the Irish language was minor. Yet, even still, a few modified versions of this work replaced the Irish with English ❗ (sigh)

As previously mentioned, some of the performers (such as Janet Munro and Sean Connery) playing primary characters are not from Ireland and, while they attempt appropriate accents, at times their accents falter.

Nonetheless, I enjoyed and recommend this. It portrayed fantastic creatures and spirits such as the aforementioned banshee, a dullahan (headless spirit), leprechauns (the little people of course!), and a pooka (magic horse). Thus, Darby O’Gill and the Little People gave some screen time to Irish culture while providing a rewarding tale. (You’ll also hear Sean Connery sing which I suppose might be a selling point.)

The special effects (forced perspective, oversized props, etc.) were well-done, with the exception of a scene in which Darby puts King Brian into a bag and it’s clear that Darby is holding a doll. Those techniques are used by producers making size content today. However, those producers would do well to duplicate the same levels of effort made in this film, as demonstrated for instance by actors maintaining sight lines when using forced perspective.