J. M. Wilde is a relative newcomer to the size-fetish community, but has already created several enjoyable stories. He has written two stories posted on the Giantess City forum. They are “A Short Run” and “No Picnic.” He also has two novellas, “Just a Drop” and “Just a Little Fling: A Shrinking Man Fantasy,” for sale on Amazon and Smashwords. Personally, I am a big fan of giant growing couples and thoroughly enjoyed “Just a Drop,” and I already expressed to Jim how much I’d love to see a sequel. Additionally, he has participated in the quarterly Size Riot contests since WritersOct18, and has recently created a Patreon page.

Outside of writing size fantasy erotica in my downtime, I’m actually a professional writer. My main hobbies are watching movies (I’m a cinephile with very particular taste), listening to music (I’m a vinyl hipster), and playing tabletop roleplaying games. Despite living in Ohio, I don’t really get what the deal with “ope” is. I’m kind of a gourmand when it comes to coffee and hot sauce (just not taken together).

#2) How did you first become interested in size-fetish media?

Size fantasy has been a part of my life for nearly as long as I can remember. Like many others, it first manifested when I was very young; I believe I was around 4 or 5 years old when I was first enthralled by it. Watching the finale scene of Honey, I Blew Up the Kid featuring a giantess Marcia Strassman was one of the most intense theater-going experiences of my life. A year or two later I caught the 1993 remake of Attack of the 50 Ft. Woman on television, featuring Daryl Hannah as the titular giantess, and those two events set off a fascination with imagery of giant women that has lasted my entire life.

Childhood daydreams turned into sexual fantasies as an adult. I was always on the lookout (in an anxious way, if other people were around) for giantess or shrinking imagery in movies and TV shows all through the years. I was a lurker in online size communities for years, primarily Giantess City and Tumblr; I started writing size fiction myself in earnest around 2015 and finally self-published in 2018. Now I’m primarily active on Twitter.

Despite being somewhat private, my closest family members and many of my friends are aware of my interest in size fantasies, and the fact that I write erotica based on it. Actually, aside from an earlier, abandoned attempt, the encouragement of a couple friends is actually what gave me the push I needed to commit to writing and releasing my first novella, Just a Drop. Having a sex-positive, kinky social circle is a really helpful thing, especially when one grows up thinking they’re the only one in the world with an unusual fantasy.

“Growing Into Herself” by RobClassAct was a major, early favorite of mine. Besides his work, several stories by Rapscalion, such as “Reaching New Heights,” really impacted my view of what size fantasy writing could be. Since self-publishing and getting more active with size fantasy again, I’ve been enjoying reading the work of authors like Aborigen, Taedis, and Elle Largesse; it’s hard to pick favorites but I’ve loved their entries in Size Riot this past year, and obviously we have Aborigen to thank for keeping that event going.

#5) How would you describe your own stories?

I suppose I’d describe my own stories as sensual; I try to focus on both sensations and emotions surrounding shrinking and growth. When I write size differences I try to capture feelings of awe, and look for ways to emphasize mundane details that are suddenly no longer mundane. I’m not so interested in being technical (I often try to avoid putting sizes into exact measurements) but rather being more focused on a general feeling of size, of being helpless, or powerful, or awestruck, or weak, or strong, those aspects.

#6) Can you discuss the rewards for supporting your Patreon page?

My Patreon has three tiers of rewards: $2 (Tiny), $5 (Little), and $10 (Big). All are monthly tiers. The Tiny level grants early access to short stories and flash fiction pieces before they’re posted elsewhere, plus access to polls about what sorts of stories I may write in the future, that sort of thing. The Little level includes all of the above, plus previews of longer works, such as finished chapters of yet-to-be-released novellas, and a free download of a previously published longer story. Lastly, the Big level includes all the same things just mentioned, plus the entirety of new novellas before they’re published.

I may experiment with some higher tiers in the future, things like custom stories and the like. While the Patreon is launched already, I plan on posting to it regularly starting in January of 2020. I’ll be aiming for one to two short stories per month posted to Patreon.

#7) Are there any upcoming projects that you would like to mention?

I actually have a whole stack of size fantasy ideas, and deciding what I focus on next might be influenced by a Patreon poll! There are stories that focus on various aspects of size fantasy I haven’t explored yet, and some focused on familiar territory. Most of them have a science fiction-basis (many have a premise that feels like a kinky, size fantasy Twilight Zone episode) though I’d also like to try doing something a bit more fantasy based, and I have one really fun idea in that genre. And you and some others have asked about a Just a Drop sequel…I haven’t developed anything yet, but I’m not ruling it out!

Despite being primarily a giantess and giant couples fan myself, I’d also like to explore some other dynamics. Giant men, shrinking women, I’d like to explore different takes on size fantasy that are maybe represented less often. I’m sure there are readers who’d like to see some different things, and I like to try and push myself out of my comfort zone as a writer, too. Hopefully I’ll be able to do enough that there will be something for everyone among my stories.

Thank you for all the great questions and taking the time to do this interview!

Thank you Jim for this interview! Check out his blog, https://wilde-fantasies-erotica.weebly.com/, and his Twitter feed here: https://twitter.com/wildefantasies 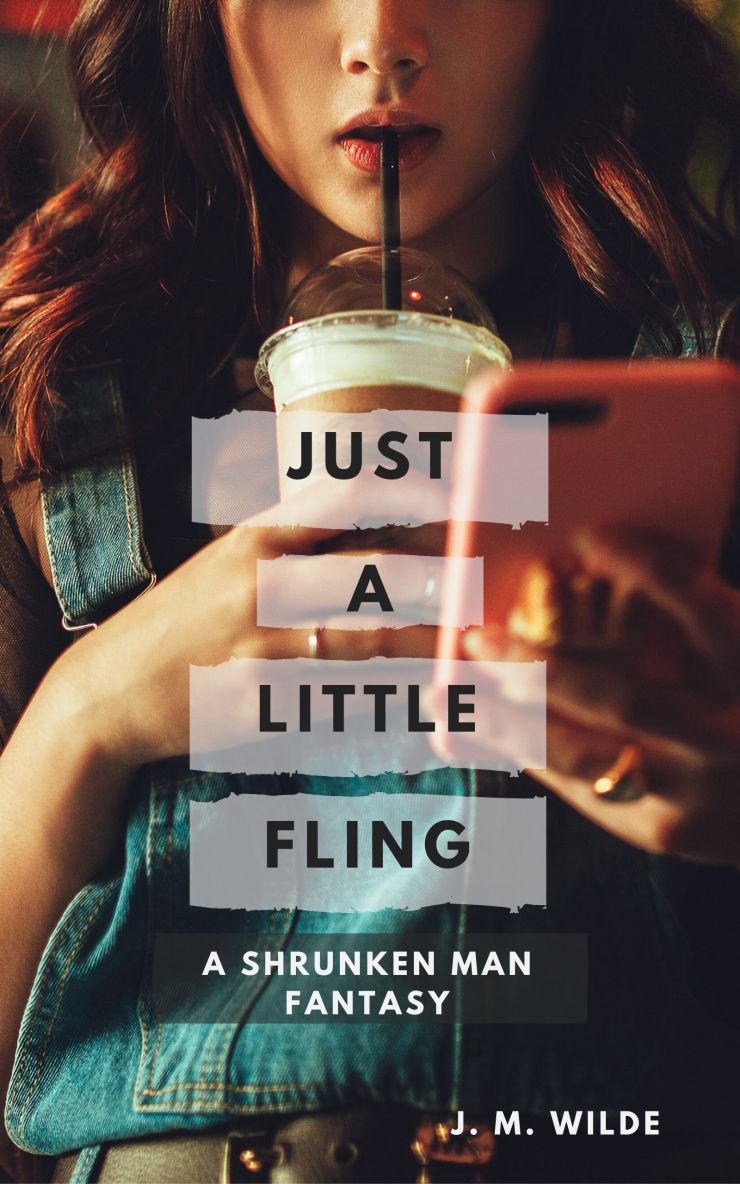 1 thought on “Interview with J. M. Wilde, writer of tales involving both growing and shrinking lovers”