Good morning one and all. I am completing the look at Katoh Hironobu’s Manga series “Giant Warrior Nagi.” The first volume was covered here. Today’s review concerns the second and final volume. (NOTE: To the very best of my knowledge, there are no plans to create a Nagi anime or continue the manga at this time.)

This time, due to the events at the tail end of Volume 1, the battle between two giant ladies will be fought with unrestricted weapons and seconds, normal-sized people, will enter the fray. In fact, Volume 2 is just an extended battle sequence between Nagi and Saeko Kiryuu.

There’s plenty here for giantess fans. For instance, at one point Nagi is forced to step on her second, Shouta Kirishima, to prevent him from doing something. (NOTE: He’s fine, it just allows him to clear his head.)

Nagi also holds him in her hand.

Further, there’s lots of martial arts action, and at one point Nagi shoves her opponent through a series of old apartment buildings. 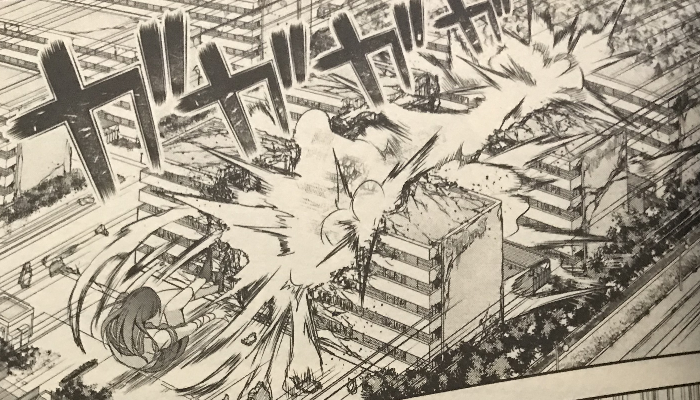 However, the second volume maintains the flaws of the first. Namely, there is no tension. For example, several nameless soldiers are viciously maimed during battle.

Yet, they regenerate and everyone is fine. So, no one is ever hurt. I’m not even certain if anyone has their feelings hurt 😉  The stakes are low.

To be fair, there is some conflict in the form of a love triangle. While Saeko has never even held Shouta’s hand, she loves him “as a woman.” Nagi is also in love with the young man, and thus there is conflict. However, Shouta is oblivious, and no statement was made as to which girl he prefers. (Thinking out of the box, perhaps a polyamorous relationship would be the ideal solution? 😉 )

Additionally, there is corruption in the organization which oversees Japanese giant fighters. However, I did not get a sense for exactly how that was bad. (NOTE: Obviously, corruption as a concept is bad. But what negative effect does it cause in this comic? Nagi was pressured to throw a fight in Volume 1 and no one wants to lose a match on purpose. But what else? For the record, she declined to throw the fight and that was the impetus for the long-running battle in Volume 2.)

All in all, I give Giant Warrior Nagi a slight recommendation for fans of giant girl kung fu and chaste romance. Those interested should be able to pick up the Nagi volumes for cheap. I bought both for ￥559 (approximately $5.14), including shipping. Obviously, your shipping cost may vary. 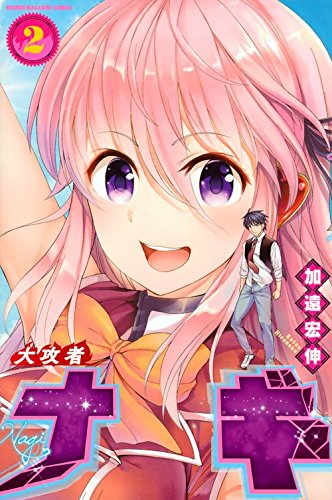