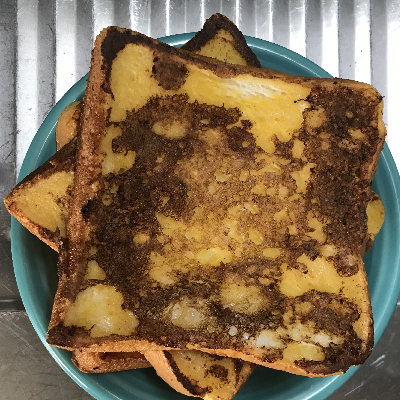 Today, I’d like to discuss French toast, one of my favorite dishes. Native English speakers may not be aware that the French term is “pain perdu.” ⭐ Loosely translated, it means the “pain which comes from Santa’s absence.” In medieval times, eating delicious French toast alleviated the pain which arose during temporary absences of the gift-giving saint. For instance, the following photo, from Lovely Lilith’s “Holding Santa Hostage,” depicts a woman preparing to kidnap Santa Claus. An act which would, of course, then trigger people to miss his presence and begin cooking the tasty meal.

Today’s review covers a comic, previously available on the “Expansion Comics” web site, which depicts what also might happen during an absence of St. Nicholas. Expansion Comics is no longer online and its old URL looks like this, as of mid-December 2019:

However, for many years the web site looked like this:

As far as I can determine, using the Wayback Machine, it went off-line sometime in 2015. (NOTE: I don’t know the reasons for the site’s demise.)

This review will cover both parts. All together, the comic consists of only 12 color pages with multiple panels per page. 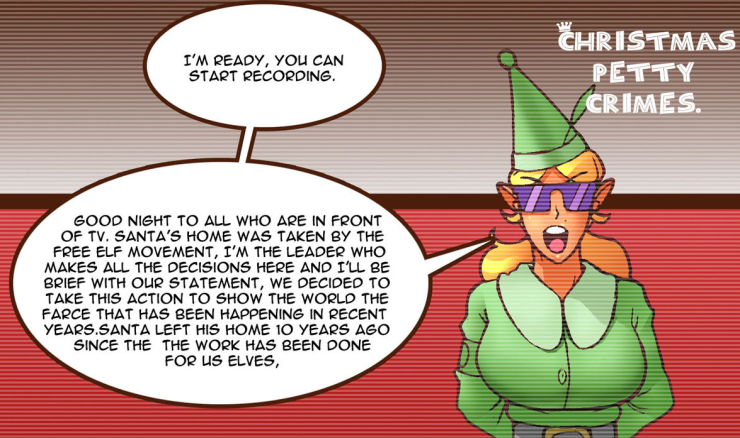 The plot involves a group of elves who have seized control of Santa’s home. The leader of the Free Elf Movement discloses that Mr. Santa Claus ran off with Mrs. Claus’ younger sister. Thus, elves have been running things. However, the Free Elf Movement rebelled and decided to grant wishes, on camera, which were previously ignored because they were considered to be in bad taste.

In addition to the blonde above, three others also expand. Two of which lactate and spray copious streams of breast milk onto their leader. That occurred just before elven police broke in to restore order and conclude the comic.

In general, I enjoyed the art in this comic, but the backgrounds were non-existent. Characters were drawn, but very little behind them was depicted. Instead, the majority of the backdrops consisted only of solid colors, which was a real shame. Furthermore, the story needed work. It’s very short, but still had a few errors as can be seen in the two above images. Therefore, I can’t recommend this.

⭐ “Pain perdu” actually means “lost bread,” referring to the original practice of using old or “lost” bread in the recipe. Nevertheless, I thought it would be more fun to connect French toast / pain perdu to my size-fetish reviews with a holiday-themed, although inaccurate, translation! 😉 😀