Caloric deprivations continue in the SolomonG household. As I write this, a culinary abomination called cauliflower pizza has regrettably found a home in our freezer. (The abnormal crust pizza was a meal that I myself requested. One’s mind cringes at the sacrifices necessary for one’s health!) Turning my thoughts from that egregious situation, I have continued my quest to find the best that the macrophile community has to offer. Accordingly, let us examine today a creation from a Japanese macrophile.

While searching for new size-fetish videos I found several produced by Sangouki Film. I was intrigued at their catalog and selected “Giantess FUYUNA” to review.

The story begins with Fuyuna, a lovely young lady, reading from an electronic tablet. She is the sole cast member on camera. The text she is reading tells of a mystery brought to life. (NOTE: Unfortunately, there was no English translation provided for the many instances of Japanese text, but I do not think that will prove to be a significant obstacle. Even if viewers cannot read the Japanese, they’ll still see a giant woman walk through a city and destroy buildings, cars, and trains!)

After her time reading the tablet, we see Fuyuna as a titaness in the middle of a city.

The many signs posted around the towers went a long way to making this feel like a real urban environment. Compare this set to the model cities made by Giantess Media World and Media Impact Productions, examples given below:

To be fair, those examples include street signs, from Giantess Media World, and street lamps, from Media Impact Productions. However, there were no billboards, murals, or store names emblazoned upon buildings.

(NOTE: To Giantess Media World’s credit, its example had a proper backdrop via chroma key effect which was markedly better than the solid black from Sangouki or the blue from Media Impact.) 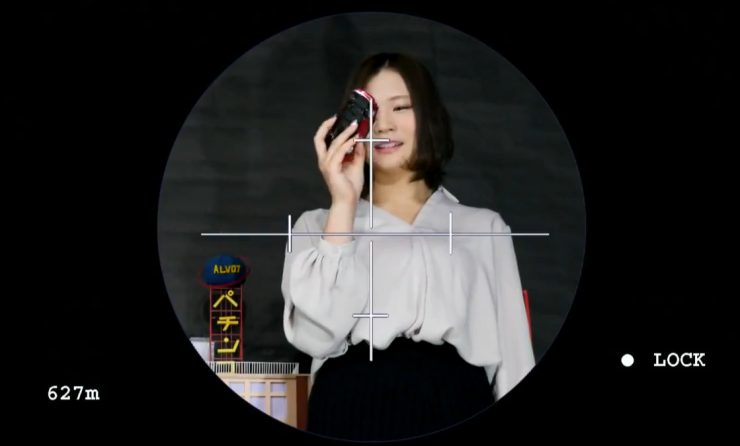 A highlight of this production was the functioning electric lights, as seen below:

Returning to Fuyuna, she was attired in nought but a black bra and panties for the majority of the runtime. 😎

Although, I’d have preferred if she went nude or at least topless.

Furthermore, the actress’ movements were often tentative with her forearms initially held up and kept close to her sides. Presumably, that was to prevent damaging the models before the director called for it. That’s an understandable precaution, but it detracted from seeing the woman as a force of destruction. Instead of recklessly rampaging through the city, she carefully chooses her targets.

However, the destructible environment was well-done for the most part.

The video comes in two parts. The first consisting of the 30-minute main story and the second a 10-minute short detailing the production process. Additionally, this video is sold in multiple formats, ranging from high-definition for a PC to a lower definition better suited for mobile devices. Prices range from 3520 Yen to 4400 Yen, depending on which resolution the customer desires. That equates to prices in American dollars which are roughly between $33 and $41, as of early April 2020.

I want to recommend this, but I understand that the price is expensive compared to similar destructive giantess videos. For instance, Giantess Zone’s “Dani Jensen in Pleasure of Destruction 2” runs for 40 minutes, but sells for only $14.99. (Read my review of that video here.) In the same fashion, you can buy Part 1 and 2 of Giantess Media World’s “Skadi’s Rampage” for a total of 16 Euros (roughly $17.39) and combined those two parts run for 29 minutes.

Nonetheless, it’s interesting to see what size-fetish creators are producing around the world. Therefore, if you have the funds and like destructive giantesses then you should appreciate this. It can be purchased here: https://jp.xcream.net/item/155253 (On the top right are links for the page in Chinese, English, and Korean, via machine translation. They are certainly not the best translations, but are serviceable.)

Before you purchase, potential customers should also check out the 30-second preview on YouTube here: