Lingster is the artist and writer responsible for “Growth Comics.” Those are a series of 3-D CGI comics primarily focusing on breast expansion and female muscle growth. However, Lingster also published a shrinking-themed work called “The Secretary and the Shrink Ray” in June 2019. His most recent works include “12 Transformations: Breast Expansion,” a series of graphic novels presenting a dozen separate sequences, and “Muscles for Christmas,” a story about an ordinary guy dealing with his female relatives, fiancee, and co-workers becoming incredibly strong. Fans can find those works at Growth Comics and follow Lingster on DeviantArt, Instagram, and Twitter for previews and the latest updates.

I live outside Washington in Fairfax County and work for a technology company here. I moved to the area for work from New York more than 10 years ago. Currently my life is set up so that I don’t have to rely much on driving or mass transit, I’m able to walk to most of the places I need to go. Traffic in the DMV area (Editor’s note: DMV is a nickname referring to the District of Columbia, Maryland, and Virginia) is terrible and I’d move before I became a commuter, here. I can’t stand the Beltway or the Metro.

One of my hobbies is motorcycle touring. I own a travel motorcycle and I go on long trips a couple times per year. I’ve ridden across the United States several times, typically on the old US highways, avoiding the Interstate system unless I’m in a rush. I’ve been tempted to start collecting Iron Butt awards – Google it if you want to know more – but I’m getting old enough that endurance riding can be a challenge. Also, I was in a fairly serious motorcycle wreck a few years back and among other injuries broke bones in both hands. Eventually everything healed up OK (I spent a summer without being able to use my hands much) but one of my hands is prone to cramping, now. So these days it’s hard to keep a grip on those handlebars for hours on end without a lot of pain and discomfort.

I am also into weightlifting and belong to a small barbell gym. I was hoping to deadlift 500 pounds this year but my training program’s gone to hell because of COVID-19. Maybe I’ll make 475? Hard to say.

#2) Your biography at Smashwords states that in childhood you won a “Marvel No-Prize.” (Editor’s note: A No-Prize is a fake award given to readers, often for spotting and/or “correcting” continuity errors in Marvel Comics.) Can you provide any more details? For instance, which super-heroes or villains were involved?

Yeah, I made that up because I thought it was ridiculous. I definitely read comics when I was a kid, though. I didn’t really like Marvel Comics until my mid-teens because the Marvel heroes were forever causing massive property damage. They’d wreck whole city blocks, fighting each other! It seemed irresponsible. When John Romita, Jr. starting drawing X-Men, though, I was hooked. I bought Uncanny X-Men #189 and thought it was about the coolest thing I’d ever seen.

Around the same time I got to be old enough to begin making occasional trips into Manhattan by myself, which gave me access to Forbidden Planet and other comic book shops, and thus access to some of the indy stuff that was coming out at the time. That was an amazing time for comics, before the industry collapsed in the early 90s.

#3) How did you first become interested in breast expansion (BE) and female muscle growth (FMG)?

I was always fascinated by size differences and power disparities, even from childhood. As young as seven or eight, I can remember stuffing the clothes of superhero and Barbie dolls with cotton balls to give them muscles or bigger breasts. Both sexes. My sister’s Barbie dolls were slightly larger than the superhero dolls I had, which I also found interesting.

When Art Adams began to draw comics for Marvel in the mid-80s, I was drawn to his work. He had She-Hulk appear in his Longshot series and she looked amazing. Also, he drew some of Chris Claremont’s X-Men annuals that dealt with age regression and progression that I thought were very sexy. I don’t know how old you are, but do you remember being a teenager and when you saw something that sexually excited you, you could feel it in your face and scalp, because the blood would start pumping? Those annuals probably turned my whole head scarlet. Claremont also wrote some female muscle growth and breast expansion themes into Excalibur beginning in 1987, and the phenomenal Alan Davis drew that. Amazing stuff.

I was drawing and tracing a lot at the time – mostly female growth sequences. I think I have them in my basement storage locker. Maybe I can scan those at some point – they’re not very good but maybe people under 40 will appreciate seeing what lengths we had to go to before the internet.

Not incidentally, my next door neighbor growing up was a girl my own age who just exploded when puberty hit. In the space of about 18 months she grew four or five inches to 5’8”, wound up with the biggest boobs in our high school as a freshman, and began training for bodybuilding. She was only a couple months older than me but at 14 she had a fully adult body and muscles bigger than most of the older high school boys, while I was physically still a child. I’m sure that had some impact on me.

#4) Are there games or films you could recommend for those stuck at home because of Coronavirus disease 2019 (COVID-19)?

I’ve been working my way through the MCU movies, the Harry Potter Films, The Wire, Justified, and Deadwood. I’ve been blowing a dangerous amount of time playing FreeCiv.

#5) What are a few of your favorite works from other creators?

I’ve always liked Marknew’s stories the best. Bojay’s work at DreamTales is consistently a pleasure. There are so many talented younger artists I wouldn’t know where to start. I’d love it if Kagi13 would come back to us. 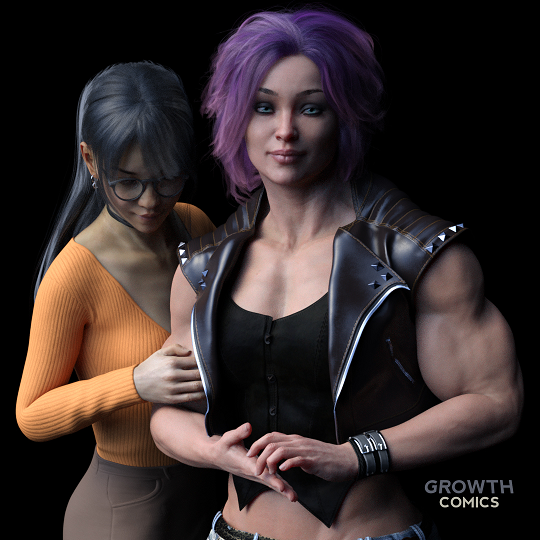 #6) How would you describe your own art and stories?

My work’s OK. I’m not the best but I meet a consistent level of quality that people seem to appreciate and rely on. I’ve been publishing online since about 1995 so there’s a fair amount of it. Sometimes people write me and tell me they got into FMG or BE because of something I wrote or made, and I have mixed feelings about that. I’m happy to cater to someone’s fetish but I don’t care for the feeling that I’ve helped incubate a fetish. I’d prefer if people didn’t see my stuff until their sexual interests were set firmly, maybe late teens. That’s probably not realistic but I fear corrupting people.

So, I lost my virginity to a female bodybuilder, 30 years ago, and more recently I’ve dated a couple 40ish, divorced CrossFit moms. Most of my successful relationships in between were with unusually strong, tall or well-developed women. And that’s great. But there aren’t that many women who conform to what I find sexually exciting and a lot of them have personality issues (or other issues) that make long term relationships a challenge. So, I’m middle aged now and I don’t have some of the things other men my age have – wife, kids, etc. I regret that. I still have a shot, but it’s pretty late in the game.

All things considered, I’d prefer having a thing for pixie girls – they’re all over the place.

#7) Do you have any upcoming projects that you would like to mention?

I’m hoping to have Strength Conspiracy #3 out by May 20th. It was supposed to be out earlier, but I had a hard drive failure that was a pain to deal with – it’s hard to get PC parts right now! I’m also working on another Female Muscle Growth “12 Transformations” book, which could conceivably be out at the end of the month.

I’ve got a breast expansion short story I may publish soon. It’s about a woman who misreads the label on a Brazilian breast enhancement cream and the next thing you know she’s got tits the size of Gaucho sheepdogs.

My goal is to figure out how to produce about two published products for month and make a little money on them. Right now I’m probably putting out publications that are too long for what I’m charging. I’m pleased to deliver a lot of value but I need to feel like I’m getting out of it what I need to, also.

Everything gets posted to GrowthComics.com, regardless of whether I’m publishing to Gumroad, Amazon, or Smashwords and its affiliates.

Thank you for doing this interview!

1 thought on “Interview with Lingster, the Creative Force Behind “Growth Comics””