I want to review a work produced by TaylorMadeClips. That studio has been creating transformation videos since 2007 covering a wide range of topics such as belly stuffing, body inflation, breast expansion, female muscle growth, futanari, gender switching, giantess growth, shrinking, and weight gain. Today, I’ll examine one of their futanari-themed clips.

Specifically, this post will analyze “Late Bloomers 2: Cock Growth.” This is a 17-minute clip first released in 2012. It stars “Cindy” and “Soleil” as a pair of young college students. Cindy claims that recently her breasts have been growing at a rate of “a cup per day,” which is rather hard to confirm based on her loose and concealing attire.

Cindy becomes aroused and grows a penis, as co-eds apparently are wont to do 😉 No reason was given. She eventually infects Soleil who subsequently develops an even larger penis. The clip ends with the two giving each other handjobs and Soleil ejaculating all over herself.

This clip fits into a weird space between safe for work (SFW) and not safe for work (NSFW). Which is to say, this is definitely NSFW. I imagine watching this clip at work would not be acceptable behavior in nearly all office spaces. Yet, while clearly NSFW, the ladies stay completely clothed throughout.

So, was the intent to make this clip non-explicit? The actresses were not attired in revealing bikini’s or lacy lingerie that leaves little to the imagination. In fact, they’re dressed rather conservatively, such as the blonde Cindy in her long-sleeve dress and dark stockings.

Since it’s NSFW anyway, I would have preferred if the ladies fully disrobed and went all out. Something more akin to the web site Futanaria which features fully nude women penetrating each other with their lady cocks.

Furthermore, price per video is significantly less at Futanaria. For example, as previously mentioned, this video is 17-minutes long and features two performers. It costs $22. However, Futanaria’s “Sex at the Sperm Salon” is 22-minutes long, features three performers, and costs $4.99 at Radrotica. Radrotica is a site where individual videos from sites like FutaFEMDOM, Futanaria, Mastasia, etc. can be purchased without requiring a monthly membership. (NOTE: A monthly membership at Futanaria costs $29.99)

That noted, it’s important to point out that TaylorMadeClips features the transformation process from normal woman into futanari in a much more detailed fashion. The vast majority of Futanaria videos do not show transformation. Instead, the women have penises without any explanation given.

When the female characters in Futanaria clips first become futanari (such as in “From Female to Futanari”) or their penises grow larger (such as in “Dick Growth for a Date”) the special effect is achieved by having performers put on a strap-on or switch to a larger one. Their is no transition per se. No swelling bulge under their clothes that steadily increases in size. Instead, the clips cut and the process is instantaneous.

I also want to highlight that this clip arguably has a little more story than those at Futanaria. The two characters have a little background given, such as when Cindy talks about her recent mammary developments and Soleil describes her first sexual experience with a “woman with a dick” over the past summer.

Overall, I think futanari fans will enjoy this. However, they should first consider what it is they want. If it’s graphic, hardcore sex then they should probably look to sites like Futanaria. However, if process, story, and transformation is what they seek then they should check out this clip! 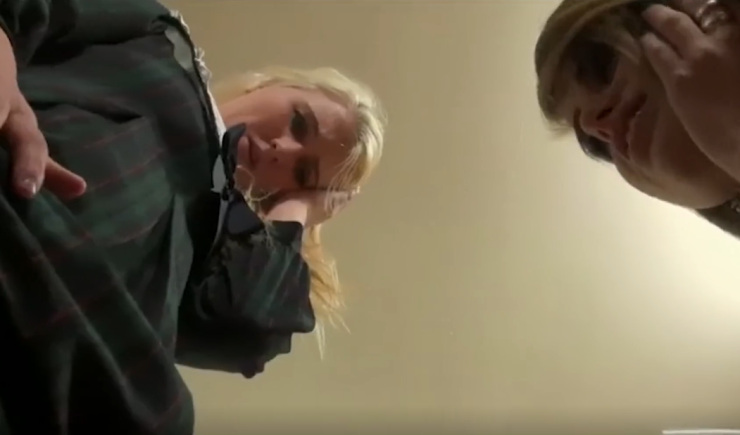