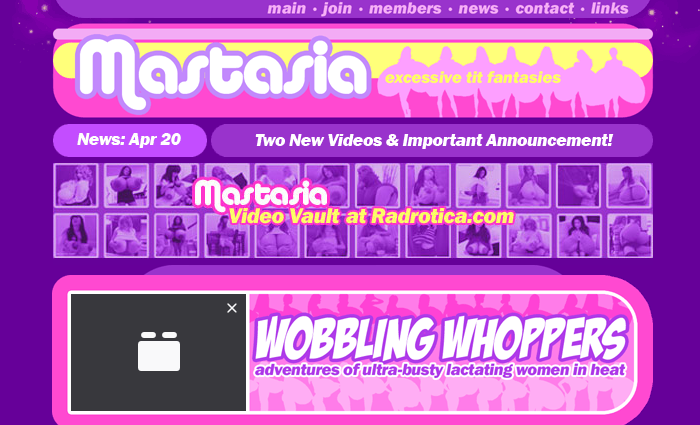 Today, I’m taking a look at the obsolete (but still online) web site Mastasia. Its member’s section officially opened in 2005. Six years later, the site’s operator, WoolyMooseMedia, announced that it would no longer be updated.

When Mastasia started in mid-March 2005, the site only contained computer-generated imagery (CGI) of women with extraordinarily, and presumably mobility-limiting, large tits.

These ladies were portrayed with and without clothing, lactating, having sex with other ladies, etc.

In early June 2005, Wooly stated on the Breast Expansion Archive Forum that he created Mastasia in accordance with his personal turn-ons which he described as “lesbians, lactation, and super-jumbogantic growing bazongas.” (Hence my use of “super-jumbogantic” in this post’s title.)

Then there was a pause during which new content was not produced for the site from November 2005 until May the following year. It returned in mid-May 2006 with a video montage featuring actresses wearing prosthetic breasts for the first time. This involved women playing a trio of characters named “Holly Hindenburgs,” “Rina Rockets,” and “Vanessa Volume.” Over time, more female performers were employed and additional characters were created.

(SIDE NOTE: Of all the alliterative names, my favorite was “Cleavage Claus.” There’s something magical about a joyous holiday being paired with an ultra-voluptuous woman.)

The inclusion of real women was a turning point. From then on, additions were no longer made to the previously posted CGI image sets. All the news updates from 2006 on concerned live-action pictures and videos. 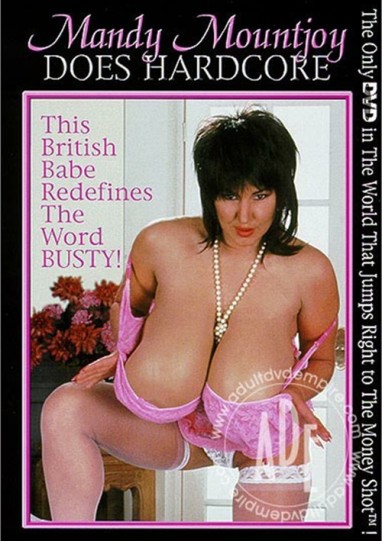 The bulk of the scenes do not show any transformations. However, the purpose of this blog is to analyze and examine size-fetish media. So, with that said, there are a few Mastasia clips and picture sets focusing on size changing. One was entitled “Rina Goes Bigger,” and involved her downing an entire bottle of Breast Expansion (B.E.) pills leading to a predictable result.

Another size-fetish themed clip was “Rina’s Nightmare,” a.k.a. “Rina’s Small Boob Nightmare!” That involves a bad dream in which she returns to her original size. (Fear not gentle readers, it has a happy ending!)

Vanessa also has a B.E. clip. However, my favorite size-fetish clip is “Janeen Casts a Spell on Rina’s Rack!” (NOTE: I think Rina was the only one to have two different sets of artificial boobs and thus had the most clips changing size.) Rina was also given a blonde wig, as shown below.

This featured the witch Janeen tying Rina to a chair in a rather ineffectual manner. Alas, we don’t get any dialogue and the only sounds are unremarkable background music. There’s a fun bit in which Rina batters Janeen’s jugs with her own, accompanied by fast-paced music. That action breaks the spell and restores Rina’s endowments.

(NOTE: Unfortunately, there are no Mastasia videos featuring progressive or incremental growth, instead growth is depicted using jump cuts in which characters instantly change size. No special effects were utilized to show the transformative process.)

On April 20, 2011, Wooly announced that Mastasia would no longer be updated. However, you can still join the site. Joining includes the option for a non-recurring 30-day membership which costs a bit more. I’d love it if other size-fetish store fronts also allowed non-recurring memberships! I dislike been forced to manually cancel a site membership when most often I only want access for a short while.

You can also purchase individual video clips originally made for Mastasia on the Radrotica web site without a membership.

Sister sites including, but not limited to, Futanaria (created in 2008 featuring women wearing prosthetic penises) and FutaFemDom (created in 2014 featuring women using fake dicks on men) continue to receive updates. Similar to Mastasia, at least one of the actresses on Futanaria occasionally wears boob prosthesis, specifically the woman who plays “Nikki Noblong.”

I enjoyed Mastasia. However, it did suffer from issues such as the scarcity of dialogue in most videos, lack of growth process, and the absence of proper sex scenes. I recommend interested persons check out the individual Mastasia clips on Radrotica. If you really like the material, then consider signing up for a non-recurring membership to get access to all of the content.