“The Carnal Candle” is a five-part series authored by Nixemus Leirbas, and illustrated by J.J. McQuade. The initial issue was released in late May 2012, and the last was published on October 16, 2013.

The story involves University of East Haven student Emily and her boyfriend Dorian, a rival named Amy, and an unnamed magic shop owner. Emily acquires a mystical candle which causes her to transform curvier and taller. Later, Amy steals the candle in an effort to teach Emily a lesson. (Because Amy is just an asshole I guess?) 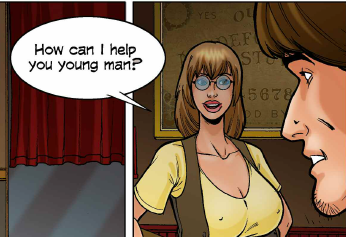 The magic shop owner looks to be the same age as the students, yet she refers to Dorian as a “young man.” That was a little odd as it’s unusual for people of the same age to refer to each other as “young man” or “young lady,” unless in jest. Her image is shown to the left, and without gray hair, wrinkles, or other signs of aging she appears to be reasonably young herself.

(SIDE NOTE: Is it just me or does hanging a Ouija board on the wall make for excellent room decor?)

The series could have benefited from some minor quality control. For example, there were duplicated, misspelled, and erroneously omitted words which could have easily been corrected.

On the plus side, there are many panels depicting Amy and Emily growing too large for their clothes. (To be clear, the ladies become too big for their outfits and then remove said attire. They don’t actually rip out of or destroy clothing by growing.) The two also break through a wall off panel.

There are heterosexual, lesbian, masturbatory, and group (male, female, and female – MFF) sex scenes. In fact, the final issue offers a great reward of about eight pages depicting lesbian and MFF sex.

I liked this series. However, given it’s age (the final issue was published over five years ago), and the QC problems I’d love to see it discounted. If Giantess Club was to sell the five issues for something like $20 then I’d give it a strong recommend. As of late August 2019, individual issues go for $4.99 and you can buy all five for $24.95. (NOTE: You don’t save any money by buying all five in a bundle compared to buying individual issues.) https://giantessclub.com/series/the-carnal-candle-full-series/