“The Curse of Saletine” is a one-shot authored by Batdas12, colored by Ruben Curto, and drawn by Davide Tinto. Batdas12 also wrote “Teacher’s Pet” and “Unstoppable Hunger” for the site. As far as my sinister eyes could determine, this is the only comic that Ruben Curto colored.  Lastly, Davide Tinto has drawn other comics including, but not limited to, “Bigger Than This,” “Bobby and Clair,” and “Don’t Mess With Margo.”

The story involves a pair of men traveling through “the barren lands.” They stop for the night and set up camp. There, one of them tells the story behind the barren lands. Formerly, it was the Saletine Kingdom ruled by a benevolent King and his cruel daughter, the Princess Elspeth.

While walking through the kingdom, Princess Elspeth callously steals food from an old crone, who turns out to be a witch. Reportedly, no one realized that the old crone was a witch. However, given that her name was “Olvitch,” ergo “Old Witch,” I can’t say that the folks were very observant. 😉  The witch curses the overly entitled thief.

The witch’s curse runs amok, and does much more harm to the innocents than to the princess herself. Not once does the royal brat express displeasure at her bizarre condition of never-ending hunger. However, her subjects cry out in terror and scream for help. So, if Olvitch’s intent was to punish her fellow peasants for the sin committed by the princess then she succeeded admirably. (Perhaps this powerful spellcaster could help with my own malevolent goals?)

Elspeth’s condition ruins the area. Although, for unknown reasons she never travels from her homeland to continue her homo sapien-themed buffet. Neither does she expire in the emptied landscape due to lack of sustenance. Instead, she lies in wait, a fact that bodes ill for the two travelers.

I like this tale of wicked cannibalism. The art was detailed and most panels had nice backgrounds. Elspeth was depicted as quite the attractive blonde even while killing scores of peasants! This comic gets four unexpected Santa Claus impersonators out of five. Sign up for a membership at Giantess Fan to read it for yourself. 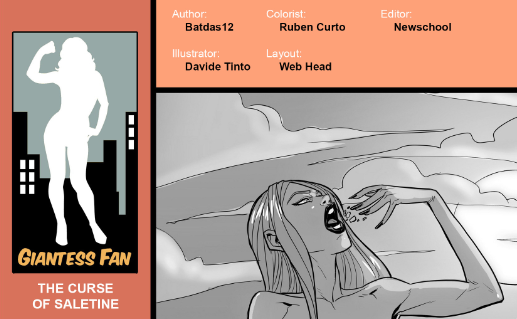