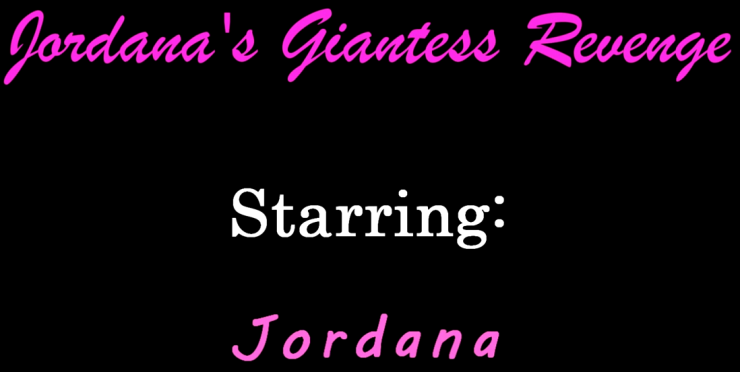 (NOTE: This review was requested on April 14, 2020 by “Joey Tribbiani,” presumably while he was waiting for NBC to reboot Friends or Joey, in the comments section of the Growth Dreams’ “Shoe Growth Fantasy 2” review.)

In my first review of a Jordana-Rama video, specifically in the “I Want Them Bigger!” review, it was stated that I “… plan to highlight more Jordana-Rama clips in the future.” Alas, that was over eight months ago, and I’m just now getting around to another Jordana-Rama clip. However, since I recently received a request to review this video, it’s time!

This is a custom video. Before I begin my analysis, I want to take a moment and briefly discuss my perspective on reviewing customs. Some studios, such as Growth Dreams, only produce new videos when a customer requests a custom. The customer gets a video made to their exact specifications and then the producer also sells the end product to the general public.

Studios may stress this fact in response to criticism. Specifically, they may say that because a certain video was a custom they were unable to adjust the story.  I want to be clear. I understand and agree with such statements. For instance, if a customer wants twenty minutes of a woman in a bikini stepping on a miniature city then I believe that the customer should get exactly that. (NOTE: Obviously, this is assuming that the studio is willing and able to meet the requirements.)

However, regardless of whether a production decision was made by a customer or a studio, that will not change my reviews. If I find twenty minutes of a woman in a bikini stepping on a tiny city to be boring, then I will state that, regardless of whether a video was a custom or not. My rationale is that I am attempting to educate potential customers. Based on that rationale, it does not matter whether the producer wanted 20 minutes of a giantess rampaging through a miniature city or a customer wanted it. The end result is the same.

So, bottom line, whether a video is a custom or not has no bearing on my reviews. I do not intend to withhold my opinions simply because a specific work was created as a custom request. I think that I’ve stated my justification clearly enough, but if there are still questions please comment below or send me an e-mail. (NOTE: This is not meant as a rebuttal or reply. Rather, this is merely intended to explain my approach on reviewing customs.)

Alright, now let’s begin! “Jordana’s Giantess Revenge” is a 14-minute clip first released in early August 2017. The titular Jordana begins by complaining that her boss gave a co-worker a raise. She then proceeds to put a big “magic” pill, what looks to be a hard peppermint candy, into a cup. The pill is meant to dissolve into a drink for an hour before use.

(NOTE: It’s obvious that her cup was empty due to the rattling noise the pill made when dropped inside the blue Solo cup. Why didn’t they fill the cup with water if the script called for the pill to be placed in a drink?)

Later that evening, Jordana’s boss comes to her house, at her invitation, for dinner. He is never heard or seen, except as a miniature figure. This would have benefited by adding another performer to portray him.

She intends to take vengeance due to being passed her over for promotion, thus she wants to became a giantess to gain the means to enact her revenge.

After growing through the ceiling into her attic she enacts retribution by swallowing her boss.

After swallowing him, Jordanna shrinks to her normal size.

(SIDE NOTE: I hope to see a vore video someday in which a moral justification for killing the other person is given. For instance, in this case a person is murdered because he gave a raise to a woman’s co-worker instead of her. That hardly seems like proper justification.

In vore, even the slightest provocation warrants man slaughter. Did you post spoilers online for the latest summer blockbuster? If so, then by established precedence a giant has carte blanche to murder you, your family, your pets, and your local postman for good measure 😉

How about we get a production in which a policewoman is trying to catch a serial killer. She knows the killer’s identity, but for some reason cannot prove it. Thus, she grows into a giantess and swallows the monster whole in order to protect innocent lives. Is that still a grisly concept? Yes, without a doubt, but it would provide some proper justification.)

The next morning Jordana wakes up and vomits up the clothing worn by her victim.

There were several aspects of this production that could have been improved at little to no cost. Some examples are as follows: #1) Put liquid in the cup since the story called for it to be full of drink, #2) Take off Jordana’s bracelet after she grows, #3) Soak the boss’s clothes in water so they resemble things that have been regurgitated, #4) Decorate the set so it looks like someone’s house, and #5) Remove the watermark.

As far as suggestions that would require money or significant effort I’d advocate for the following: #1) Refine the chroma key effect and matting used to avoid a jagged outline around Jordana, #2) Employ another performer to play the boss’s role to avoid the awkwardness of Jordana talking to herself, #3) Destroy the clothes and shoes when she grows, and #4) Set up some debris (such as wooden boards, dust, etc.) around Jordana after she wakes up at normal size so it looks like she previously grew through the ceiling and partially destroyed it.

Those aspects noted, overall I think this was an enjoyable evil giantess clip. Therefore, I recommend Jordana’s Giantess Revenge to vore fans. It can be purchased for $12.99 here: https://www.clips4sale.com/studio/54641/18120168/jordanas-giantess-revenge-wmv