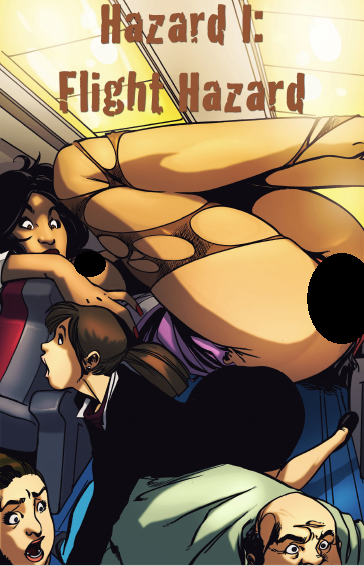 One of my readers, Gourd, requested on July 25th, in the comments for “Giantess Club’s Top 5 and Bottom 5 Illustrated Series, as of April 2020,” that I review Giantess Club’s “Hazard” series. I was more than happy to oblige. So let’s dive right in!

Hazard is a four-part series authored by Lorekeep (he wrote the first two) and Kris P. Kreme (for the last two), and illustrated by Mariano Navarro (a.k.a. Peter Logan) and Hernán Cabrera (a.k.a. Chris Flash). Lorekeep wrote other Giantess Club comics such as the first issue of “Ascension” and “PMD.” Fellow writer Njord, in his interview, listed Lorekeep as one of the best writers at Giantess Club. Unfortunately, to the best of my knowledge, Lorekeep left the community sometime ago.

Mariano and Hernán have collaborated on many comics for Giantess Club to include, but not limited to, the aforementioned Ascension, Demolitionist, and Multi.

Issue one, subtitled Flight Hazard, was released on June 19th, 2010, and the finale was published on July 25th, 2012. The story involves a woman named Jessica who has the ability to make other women grow by making them ingest her saliva. (NOTE: Jessica can also make herself grow when aroused.) She forces herself on the first victim, Vicki Reyes, and kisses Vicki in a bathroom in order to spit down her throat.

Vicki transforms into a giantess while onboard a commercial flight from Los Angeles to Miami. (NOTE: The fundamental premise for the series, a woman growing to supernatural proportions while on a cramped vehicle, was wonderfully inventive.) Later on, we learn that Jessica was working on behalf of a Congressman and that Russian terrorists were involved.

Apparently, the Congressman wanted the threat of growing ladies so he could push an unspecified weapons contract through Congress. However, how the “threat of rapidly growing individuals” would spur the weapons contract was unclear. It certainly looked like standard assault rifles, fighter aircraft, tanks, etc., could take down the giant women. Plus, while property was destroyed, no one was killed or even seriously hurt. So, not sure how much of a “threat” was ever presented.

There was also a confusing line of dialogue stating that “the Russians will get exactly what they wanted.” Did the line mean that the previously mentioned Russian terrorists wanted the weapons contract to be passed? Why? Would they sell the weapons to America? That would be very unexpected. Does the “dissident anti-American terrorist group in Russia” want Americans to get new weapons and then use those against their group? The group was specifically identified as “anti-American.” So, it seems reasonable that they would at some point come into armed conflict with the people that they are “anti” about.

This really bugged me. So, I did some research and discovered the following pertinent material:

* This is a translated transcript of the bad guy planning meeting *

“Listen up fellow terrorists! We will soon trick the American imperialists into signing a weapons contract and acquiring super-advanced weapons! Then when the Yankee pigs fight us they will be able to shred our bodies into mince meat from miles away using their newly purchased diamond-cased, super-velocity rounds!”

“Uh, sorry sir, I just… I’m just not completely clear what our goal is. Wouldn’t it be better if our enemy had old, unreliable weapons? You know, so our chances of success would be greater?”

“Dammit Boris, can’t you just shut up for once in your life and not question our plans?”

Perhaps these underwritten antagonists merely benefit whenever American life is disrupted, but why go to so much trouble? There are certainly easier ways to achieve their presumably nefarious, but unstated, goals.

Anyway, continuing with the plot, the first two issues are dedicated to Vicki in the airliner. The third is subtitled “Road Hazard” and involves two sisters on a bus.

Kris P. Kreme took over as the writer starting with this installment, and he appears to have a thing for incest. Accordingly, after Jessica spits into their mouths, the two siblings share a passionate open-mouth kiss for two panels. Ugh, what the hell? Could we not?

Kris P. Kreme also wrote the fourth issue and, in a similar vein, two characters were identified as mother and daughter. The pair are among a number of women that outgrow their clothes. Thankfully, they didn’t engage in sex with each other, but what was the point of specifying that they were related? This is another example, of many, in which Giantess Club does not properly use tags. The site does have an Incest tag, but it was unfortunately absent in the description, as of early August 2020.

A counter-argument could be made that it wasn’t really incest; it was just two sisters kissing other on the lips. However, that would be make for a weak case and the tag should have been present to give a proper warning.

There were also a few mistakes such as scribbled handwriting over a word balloon and a typo. As seen in the following:

The art was well-done and the growth sequences, of which they were many, were nicely executed. For instance:

Bras, pant suits, rings, and stockings are all destroyed by swelling voluptuous bodies and that was definitely welcome 😎

Overall, I recommend only picking up the first two parts of this series. Quality dipped in the later installments, as seen in the previous detailed typographical errors, and that is also where the creepy pseudo-incestuous material appears. The conclusion was rushed and cursory, and therefore not a problem if skipped. There were two sex scenes, the only ones, in the last issue, but such material was portrayed much better in other comics. Also of note, potential customers can read the first issue for free!

That’s it for today folks. Until next time break out your dumbbells and blast those biceps, because Thursday’s review will focus on muscle growth! 🙂