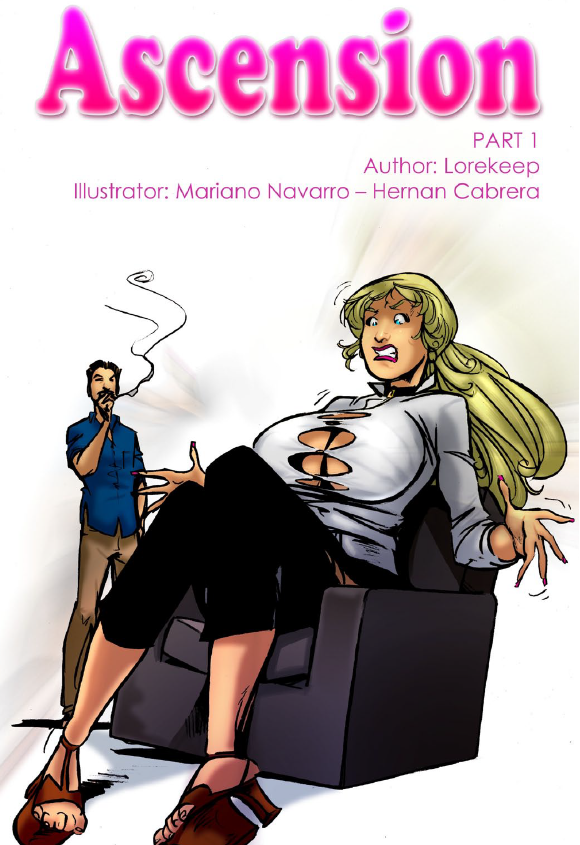 Many things happened between late September 2009 and the end of April 2019. The first chapter of Bmtbguy’s “Cheap Tricks” was produced in 2010. In November 2011, the “Giantess Fan” web site officially launched. The lighthearted sci-fi “Attack of the 50 Foot Cheerleader” was released in August 2012. The first quarterly size-fetish writing competition, CruelJan17, was created by Aborigen. A few sites, such as BEGiantess and Giantess Magic, became dormant or disappeared entirely.

And yet, during the ups and downs, among the joys and the sorrows, there was no sequel to Giantess Club’s “Ascension.” The first issue, a free sample, was released on September 15, 2009. It was written by Lorekeep with art by Mariano Navarro and Hernán Cabrera.

The first issue contains a very simple story. A mysterious man named Aaron causes a woman named Elizabeth Jadzia Smith to grow to incredible size. (Jadzia is an unusual name. Was it taken from Jadzia Dax, a character from the Star Trek: Deep Space Nine TV show? If so, that’s a bit weird. They don’t look or behave alike. Perhaps Lorekeep just liked the TV character and used the name as a tribute.) Via some unknown means, Aaron causes Elizabeth to outgrow clothes and her apartment building. She is eventually overcome by arousal and there’s a delightful bit of masturbation.

That first issue said “To be continued…” on the last page. However, as days became months and months became years, there was no sign of that promised continuation.

Until May 8, 2019, nearly a decade later, when issue two was released! This second issue has the same artist, Peter Logan a.k.a. Mariano Navarro, but xCuervos replaced Lorekeep as the writer.

In the second issue, after being asked to leave peacefully, Elizabeth attacks the responding military forces. After routing the armed soldiers Elizabeth leaves anyway, and eventually meets a crowd of adoring fans.

The giantess rampages in most size-fetish creations reminds me of the Japanese movie monster Godzilla in his later depictions. The original 1954 Godzilla film, a.k.a. ゴジラ, focused on the human toll. However, in the later depictions Godzilla continues to rampage and crush buildings, but the actual impact is not depicted.

So, it appears that fans of both types of content, giant monsters and evil giantesses, enjoy the abstract acts of destruction which present a fantasy version as opposed to the more realistic depictions seen in the original Godzilla and 2008’s “Cloverfield.” The focus is briefly on the destruction of buildings and vehicles, but a realistic display of the inevitable effects are not shown.

To quote William Munny, Clint Eastwood’s character in 1992’s Western “Unforgiven,” “It’s a hell of a thing, killing a man. You take away everything he’s got and everything he’s ever gonna have.” The gritty viewpoint expressed in that quote is absent from nearly all evil giantess stories.

Perhaps someday a new story will take a realistic approach. It could show a diverse community of all genders, races, religions, and sexual orientations band together to combat the threat of a giantess who does destruction not because she has to, in Ascension Elizabeth could have walked away without conflict, but instead causes death and destruction solely because she wants to and that desire overwhelms any concerns of others.

To be fair, I understand the desire for unrealistic depictions of giant people and practice a similar approach in my own desire for gentle growing giantesses. I’m fine with superficial contrivances which hand wave away concerns such as the square-cube law, and questions about how an immense human would breath and eat.

Back to this particular series, the art is the high quality you can expect from Mariano Navarro. Issue two ends with Aaron wanting to awaken the pantheon and it appears that at least one more woman will ascend to giantess status in the upcoming third issue. Fans of beautiful rampaging giant women will enjoy this.

You can pre-order the entire series for $19.99 at the following link: https://giantessclub.com/series/ascension-full-series/

And, as I mentioned before, you can read the first issue for free. Therefore, I recommend picking up that free copy and buying the other issues individually. $19.99 might be a bargain, but most Giantess Club series are not discounted and in fact charge more for buying the entire series instead of individual chapters. (For more details, see my reviews of “Mrs. Turner” and “Peak Shift.”)

Of course, it’s possible that Giantess Club may release four more issues which would make the $19.99 a good deal, but I would wait and see before buying the bundle.