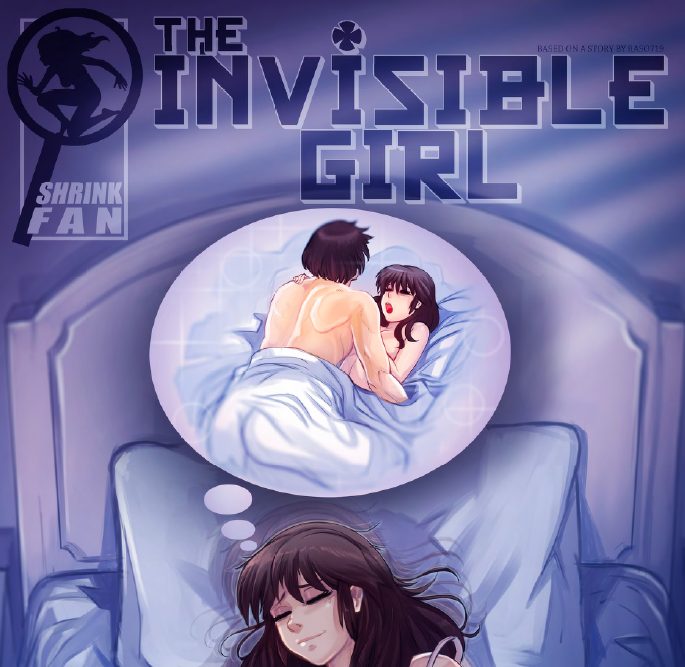 Today is a good day. After a period of cold and rainy weather, the clouds have parted and the sun is once more in play. Thus, the temperature outside has warmed a bit. I worked out at the gym, and have since changed into a black t-shirt with SpaceGodzilla’s visage and name emblazoned in neon colors. And now I get to write a review! And it’s a review of an illustrated story, “The Invisible Girl,” which I’ve already looked through and know is good.

Shrink Fan’s “The Invisible Girl” consists of two issues. The first was published on March 1st of 2019 and the second on October 1st of that same year. Both were drawn by Hmage and written by Cezar Nix (based on a story by Raso719). The issues were edited by Mac Rome, while Kevin Cruz (Studio GFX) served as the layout artist for the first issue and Takusa (Studio GFX) as the layout artist for the second. I previously signaled my appreciation for this comic by placing it at number six on my Top 10 Size-Fetish Creations of 2019. One of the highlights was the world-building. Women shrink when they have sex, or when they are aroused in at least two cases, in this story’s universe. Thus, “designated drivers” are women who abstain from such pleasures to remain large enough to drive.

Additionally, shrinking makes it clear when a woman is sexually attracted to someone. A woman could be shamed if her affections are not returned, as her intentions would be made visible due to her transformation and therefore obvious. That’s another example proving that the impact of the universe’s rules was thought out. 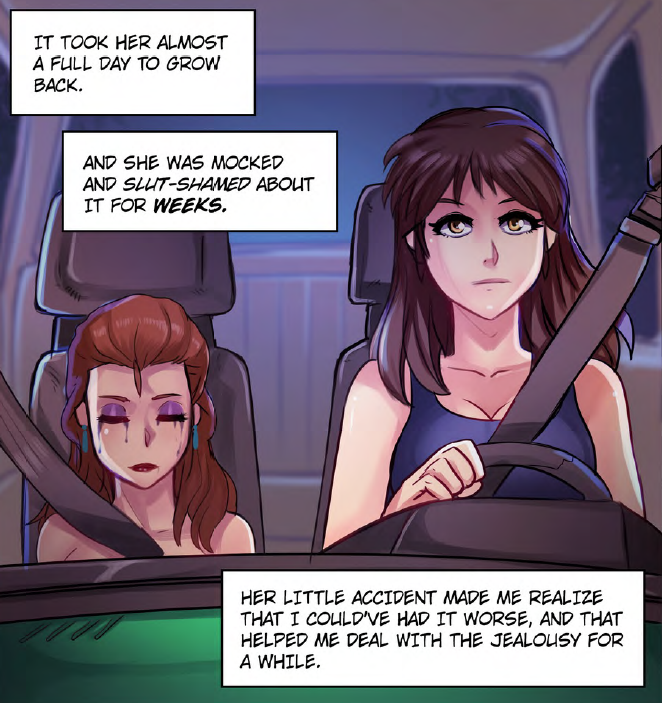 Compare that to Giantess Club’s “Mrs. Turner.” In issue seven of that series, the giant-sized Mrs. Eve Turner knocked over a skyscraper and destroyed a helicopter. Yet, in issue eight there were no consequences arising from that destruction.

Back to “The Invisible Girl,” the comic’s protagonist, Doreen, is a relatively old virgin. Her age and lack of sexual experience put her at risk of more extensive shrinking than the norm. Luckily, she eventually gains some experience in issue 2. Furthermore, she gains a unique ability not shared by her peers!

I appreciated the attention of detail in the art, including minor elements like characters wearing different clothing at times. (NOTE: I know that’s a simple detail; yet, it’s not always present.)

Compare that to Giantess Fan’s “Kolossal Katie.” In that comic, the characters Ben and Katie wear the exact same clothes for four years in a row and style their hair in the same manner. That can be seen in the below image. (NOTE: It is possible that they actually wore different outfits, but those outfits just happened to look exactly the same. In the same manner that a man may keep seven identical suits in his closet and rotate through them. However, that would be quite an unusual practice!)

As should be clear by now, I really enjoyed “The Invisible Girl” and recommend it. Regarding negatives, it was difficult to find any. The story was good. I did not notice any typographical errors, and I appreciated the art. That said, Megan’s hand did look odd in one panel. (Megan is Doreen’s roommate.) That’s about it.

You can read “The Invisible Girl” with a membership at the Shrink Fan site: https://www.shrinkfan.com/