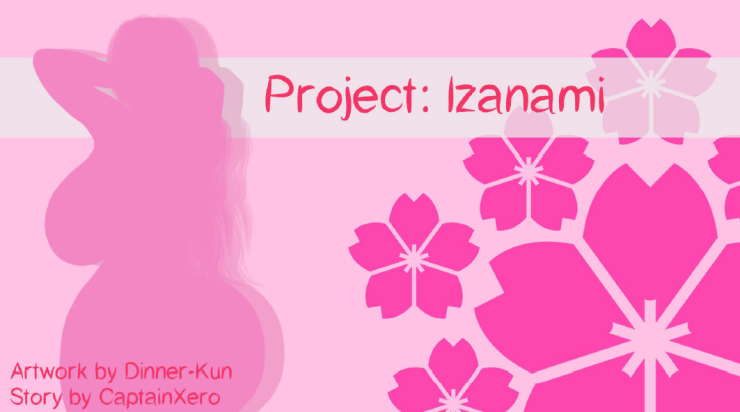 Project Izanami is an ongoing series, with five issues so far, written by CaptainXero and illustrated by Dinner-Kun. The first was released in August 2017 via Patreon then in that October via E-junkie. The latest was released in February 2019. Presumably, the series title was taken from the name of Shinto goddess Izanami.

Yukiko enjoys dominating people and is rough with a few normal sized people. She may even have crushed people in Part 4. However, no blood was shown and the extent of their injuries was not clear. So, for the most part the women are gentle (ish) giantesses, not actively seeking to harm others.

The dialogue was standard stuff. However, there were at least two instances in which dialogue was repeated several times. I discuss below a few instances from Part 3 where speech bubbles were duplicated.

As shown in the images to the left, Yukiko repeats “I can’t hold my excitement!”  In fact, she has that exact dialogue on FIVE separate pages!

I’m not sure why. My assumption is that it was a mistake. Yukiko is growing larger on each page so presumably the models and background were copied, with her character model altered to be slightly bigger each time. I assume that in the process her speech was mistakenly repeated.

Additionally, before that bit, there was a sequence where Yukiko was giving a blow job. The man repeated “It feels like your tongue is growing around my-” for five pages.

Those instances were jarring and demonstrate that this work would have benefited from some more quality control.

I liked the artwork. However, like in Curve War, I thought that Dinner-Kun made asses too large. That could be subjective. After all, I prefer busty women with breasts the size of adult movie stars like Chloe Vevrier, but I know several people that would classify Chloe as much too large. There were other problems that I highlighted in the following examples.

Overall, the story is standard fare. A MacGuffin, here a libido enhancer, causes women to grow. I expect that Jessie and Yukiko will grow until they reach skyscraper size and then the story will end.

In summation, I recommend this series. It’s full of extended growth sequences and lots of sex! It is not perfect, but it is very enjoyable.

The next installment, the sixth, is due out this March and will be available here: https://www.patreon.com/dinnerkun I expect that it will also be released on E-junkie not long afterward. Individual issues are sold for $7 to $8 (for Part 2) on E-junkie, and there is a bundle of the first four sold for $26, a $3 savings. Part 5 isn’t available there yet.