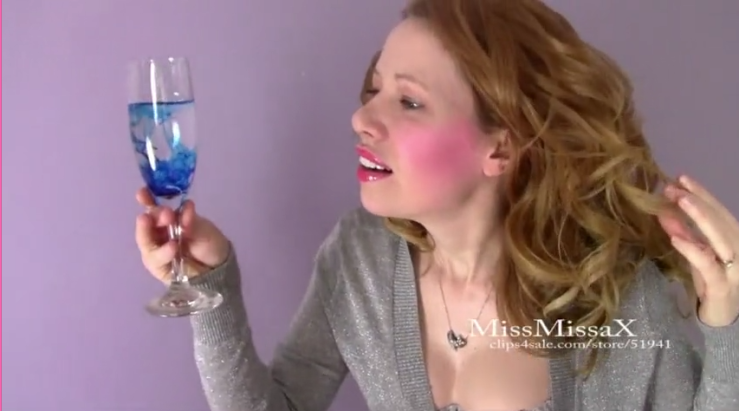 Miss MissaX’s “Giant Sex” is an 18-minute long video clip that was initially released on April 5, 2013. (NOTE: Other versions were later produced in different file formats and resolutions.) Earlier, I reviewed Miss MissaX’s Giant Sex II.  (I know, I know, I’m reviewing them out of order. However, there is not actually a linked story, beyond the similarity of Giant Sex and Giant Sex II both involving a giant man and a giant woman having sex. In contrast, the third iteration, “Giant Sex III,” features a giant woman with a normal-sized man.)

The plot involves an unnamed woman played by MissaX drinking a concoction and making her unnamed boyfriend promise to also drink it. The fluid causes them to outgrow their place and, after she spots New York City in the distance, the two stroll over and have sex in that urban area.

Unlike Giant Sex II, in this we don’t get a proper growth sequence. No ripping or tearing of clothes or breaking out of a structure.

At one point, MissaX’s shadow creates a tail, or perhaps phallic, shape between her legs, as seen in the image to the left. This issue could have been prevented by adjusting the lighting or having her step further away from the green screen backdrop.

Unfortunately, MissaX’s male partner is conspicuously silent. (I assume that’s because the actor does not want his identity known.) It makes for an eerie feeling, as if the boyfriend was a silent slasher like Jason Voorhees from the Friday the 13th franchise or Mike Myers from the Halloween series.

Unlike most other live-action size-fetish videos, this graphically shows sex. It features a fully naked woman and a man’s penis. (Although, we never see the man’s face.) The giant sticks people and vehicles on his member. MissaX talks about putting people inside her vagina and moans with pleasure.

Perhaps the most significant changes that could have been made to improve this clip lies with the green screen work and with the script.

The shadows and transparency errors highlighted in a few of the screenshots included in this review speak to the problems with the green screen work.

Regarding the script, the lack of explanation and origin for the growth concoction and the absence of identities, motivations, and personalities for the characters were flaws.

However, I think that if the story was more robust then that would make the work more interesting and memorable. We don’t need a convoluted narrative with a twist like a M. Night Shyamalan film, or a time-skipping sequence of cuts like a Quentin Tarantino movie. However, some motivation and personalities would be welcome.

(What does everyone else think? Is more story a good thing, or is it a case of the less the better?)

The city backgrounds were static and therefore unnaturally still. It’s reasonable to assume that the appearance of giant people would cause people to attempt escaping by foot or by car, yet nothing moves. In contrast, the sky background in a later scene featured moving clouds which was a nice touch of realism.

That price is expensive, so I’d love to see it discounted. If the cost was cut in half then this would warrant a strong recommend. As is, I still enjoyed and appreciated it as one of the very few live-action clips featuring giant couples having sex.

Unfortunately, MissaX has not made a new giantess video in years. That’s a shame, because MissaX produced unique content. I hope to see her return to the genre someday.