Vixen also operated her own site for awhile, but it is no longer online. (NOTE: According to the Wayback Machine, “www.vixenlamoore.com” was still online as late as November 17, 2019, but apparently it was taken down afterward. It had not been updated over the last decade, according to a forum post at the BEArchive.) Vixen’s biography, taken from her defunct site, reads as follows: 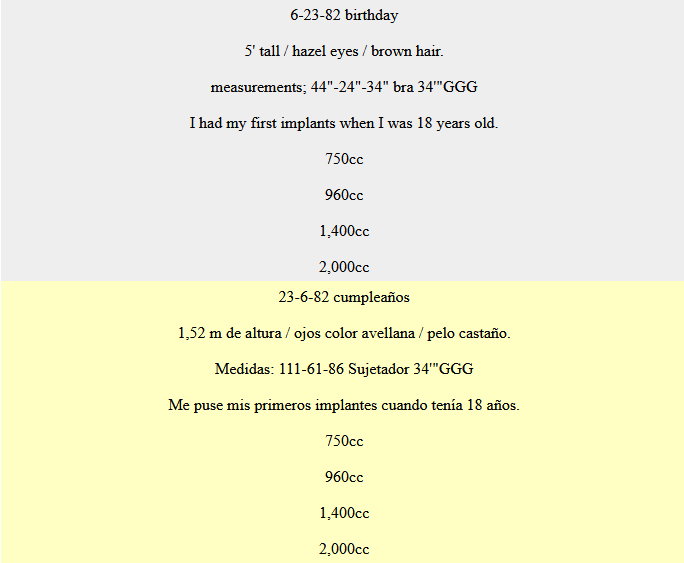 It is unfortunate that she stopped modeling because her work was very creative.

For instance, Vixen’s picture set entitled “War Games!” is of keen interest to macrophiles. War Games is composed of 74 giantess-themed images, all taking place within a miniature camp full of dolls (or action figures if you cannot bear the thought of calling them dolls) and military vehicles.

There are many aspects of War Games which make it great. For one, Vixen took the step of removing any jewelry beforehand. That may seem trivial, but performers often do not take that minor level of effort in many other productions. For example:

It is certainly true that financial constraints keep amateur producers from making videos utilizing the latest techniques in computer-generated imagery (CGI) and other post-production effects. However, the act of removing jewelry costs no money and there’s no excuse for why it can’t be done.

That said, it’s time to admit a personal hypocrisy. I have no problem with models wearing makeup. Even though, technically speaking, that makeup would not “grow” along with the person. In a more accurate depiction, lipstick that fully covered a person’s lips at normal size should only cover a much smaller proportion when that person becomes a giant. Of course, that rule also applies to eye liner, painted nails, etc. Makeup on a giantess is not realistic, but that’s okay.

Another highlight of Vixen’s “War Games” is the outfit. Her top resembles something that a recently transformed woman would create from material such as theater curtains, a circus tent, etc. Vixen’s clothing is similar to that worn by the leading ladies in the original “Attack of the 50 Ft. Woman” and the HBO Remake, shown below:

Now compare those ragged outfits to the street clothes worn in other productions:

Personally, I much prefer Vixen’s outfit. Her clothing looks like she recently grew and then struggled to clothe herself with whatever she could salvage, as opposed to just donning everyday apparel.

All that said, I understand that it takes a lot less effort when a model does not have to adapt their wardrobe and can wear whatever they have on that day. It all comes down to how much effort a producer wants to apply to their work.

It was also laudable that Vixen was willing to do this shoot in less than comfortable conditions. That is to say, it was cold outside, but Vixen did the photos anyway!

Regarding negatives, there are some small issues. For one, the dolls are attired in different uniforms, representing the armed forces of several countries. That makes sense from a collector’s perspective. A collector probably wants one or two dolls from each country, instead of several duplicates. (NOTE: Presumably, someone lent their personal collection and/or back yard with the figures already in place for the production.) However, the different uniforms detract from the sense that this is an American military camp. Instead, the camp includes soldiers from several countries standing around an American flag. That’s a quibble, not a deal breaker. We’ll call it a United Nations camp, perhaps an international anti-giantess task force 😉 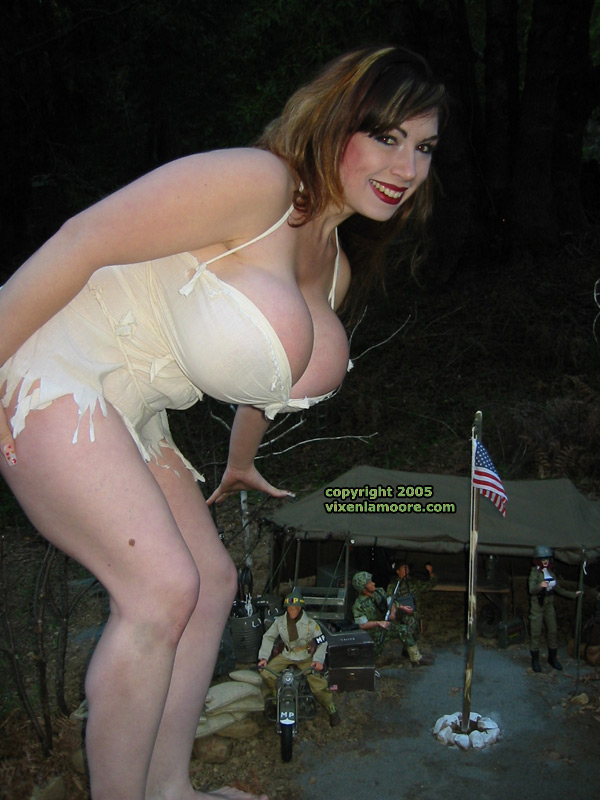 Additionally, Vixen interacts with the jeeps and helicopters. However, I must confess that it does seem a little silly with the helicopters hanging in the air with unmoving rotary blades. For instance:

Further, as a product of its time, the pictures are low resolution. Hopefully, another model will someday create a similar set, but in 4K resolution!

Overall, Vixen LaMoore’s War Games is a great set and frankly one of the very best ever made. I highly recommend that giantess fans find a copy, but caution folks that it will likely be difficult to acquire, unfortunately.